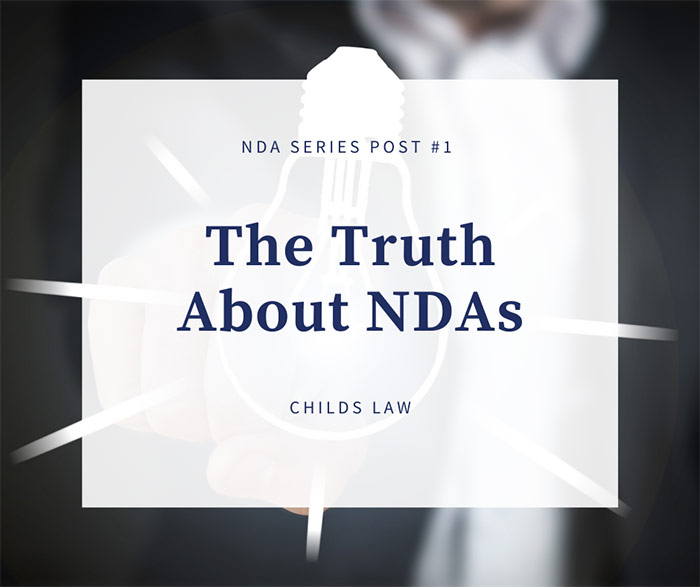 As a patent attorney, I often talk to small businesses and startups who say something like:

“What good is a patent against a large business? You have to pay to enforce them.”

Then in the very next breath, they will mention that they are discussing their invention with someone, but it’s okay, because they have an NDA.

You realize that you have to PAY to enforce an NDA, right?

NDA stands for non-disclosure agreement and is also known as a confidentiality agreement. They are just a type of contract that is so commonly used that they are referred to by a three-letter acronym or TLA.

NDAs are not self-enforcing. If someone breaches your NDA, you have to pay to sue the breaching party to enforce the NDA just like you would pay to enforce any contract, patent, trademark, copyright, or trade secret.

NDAs have been in the news a lot lately because they are powerful tools for big businesses, politicians, and celebrities to silence people, such as former employees, because there is a mismatch in power. NDAs have become controversial because rich people and big businesses have more money to enforce the NDA than the former employees to complain about sexual harassment or racial discrimination.

But what if your business is the small business and you sign an NDA with a much larger business?

You may find that you don’t have as much protection as you think you do.

Of course, I still highly recommend having an NDA in place before you disclose any confidential information to someone even if they are difficult or costly to enforce. This is because without an NDA, you simply have no options.

However, the better course of action is to limit your disclosures to only what the other party needs to know. For an invention, don’t tell them anything that would allow them to figure out how to make and use your invention.

Still unsure what to say?

Call us at 832-621-0353 to schedule your complimentary consultation with me and I will be happy to discuss how best to protect your invention. We’re available Monday through Friday to answer your questions.

NDA
1. The Truth About NDAs
2. What do I do if potential investors won’t sign an NDA?
3. Who May NOT Be Willing to Sign an NDA?
4. Who Should Definitely Sign NDAs?
5. Can You Afford to Enforce Your NDA?